In her book ‘Shadow-boxing with the Past’ Letter to Lawrence Durrell: On spasmophilia and an astounding quest, Eleni Sevin discusses her genetic muscular disorder, spasmophilia, something from which many people suffer unwittingly, since the disorder is unknown to many doctors and therapists. And this while in France, for example, about 14% of the population are latently spasmophilic…

With this book, Eleni attempts to dispel this ignorance, by naming the affliction appropriately and mapping out its extensive clinical picture – chiefly through describing her own quest for a certain balance. She hopes in this way to inform spasmophilic patients and those close to them, and perhaps also to arouse interest among doctors and therapists.

Although the book stands entirely on its own merits, in a sense it follows on from ‘A Bite of Ice-cream’, since it too is written in the form of a letter to Lawrence Durrell – this because, to an important extent, the book concerns one of Durrell’s own preoccupations: the spiritual journey through life. Indeed, Durrell tried hard to interest the atheistic Eleni in spirituality, without apparent success. At the time of his death and thereafter, however, events conspired to change Eleni’s outlook dramatically.

Subsequently, Eleni’s search for healing led her into some very strange and symbolic pathways, back into her early life, and – not a normal course of events, this – further back still…

‘Celstraf’ Spasmofilie of Constitutionele latente tetanie, a Dutch-language book, deals with that same genetic muscular disorder: spasmophilia. In it Eleni Sevin again tries to provide information for spasmophilic patients and other interested parties.

She depicts her healing journey, dealing with the entire period of her illness – from the foetal period right up to the present day.

As a decompensated spasmophile from birth, Eleni has had to contend with a multitude of experiences. In writing about them, she aims to advise other patients.

Besides that, she describes her personal struggle with Dutch medical professionals and the Dutch social institutions in her efforts to obtain recognition for the afflection.That is one of the reasons why this book differs from ‘Shadow-boxing with the Past’. ‘Celstraf’ also emphasizes the need to begin treating the illness as soon as it is discovered. In the long run, those chronic muscular convulsions will eventually cause real physical problems that can no longer be cured. 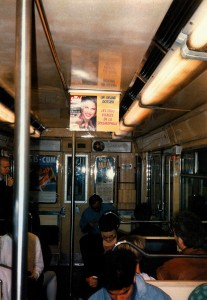 Just like that, during my first treatments in Paris, in 1992, this information was to be read in every metro I took. ‘Les 1000 visages de la spasmophilie…’ I’m afraid it’s not so easy to read – I took the picture with my very old camera. But quand-même, so unknown, and hardly or no interest for this affliction in many countries… In the Parisian metro: Just like that, indeed!

More information about spasmophilia in English will be given soon, as I can’t expect the English reader to have a look in my book, because it’s written in Dutch.  Some ‘non-spasmophilic’ persons in Holland, who read it, informed me afterwards that the contents of the book served them as well.